This was my very first experiment with LED lights. There was too much overload protection and therefore less light than possible (still more than classic light bulbs, though), some other elements were also not very successful. I'm leaving the plans here for documentary purposes; for actual use I'd recommend the improved version, or the KISS system for a bottle dynamo.

Main power plant is an ordinary bottle dynamo, consumption of the lights is based on the maximum achievable power output of 8 V= / 400 mA. A backup circuit powered by three rechargeable AAA batteries is included for standstill and low speeds.

You can fit a series of two 3V or three 2V diodes into 8 volts. You need some voltage reserve for low speeds, so don't stack more of them. Typical current of one diode (20 mA) fits twenty times into 400 mA. So theoretically we have enough power for at least 40 diodes. Or even more if you don't feed them with full nominal current - one or two milliampers less don't visibly decrease the light output and give you reserves for high speeds.

Front lights consist of four white 8-LED bars cannibalized from Chinese battery-powered tabletop lamps: cheaper than buying standalone diodes, less soldering needed, and with reflective housings, contacts and switches included. Two of the light bars have narrow-angle optics (about 15°), the other two are wide-angle (cca 120°). The former two were placed on sheet metal fixtures under the handlebars, the latter into modified housing of the original headlight.

Nine red 2V/20mA diodes are at the rear, angle around 40° (not measured). Three of them are mounted on a piece of printed circuit board inside the original taillight housing, the other two triplets are hot-glued to rear mudguard stays.

Because this is not enough to use all the generated power and because I was playing Need for speed underground 2 those days, I lit up the bottom of the frame by 12 blue 3V/20mA diodes. Four of them shine into the front wheel, four into the rear, two illuminate ground between the wheels, one takes care of front derailleur visibility and one shines up into the bottle rack (if the bottle is translucent, it looks like a warp core :-) ).

The backup battery circuit has two white LEDs at the front and one red at the rear.

All of the LEDs are round clear ones with a diameter of 5 mm.

Except of several newly purchased LEDs, all parts were salvaged from various electronic wrecks. I got the universal circuit board fragments at school and the wires are from a disassembled ethernet cable. No wonder the result looks like a mad goblin's work :-).

Everything was soldered on universal contact boards, the layout being mostly random. Eighteen white diodes, batteries, switch and the other electronics just fit into the original headlight housing, all I needed to do was to remove the parabolic reflector and bulb. Hot glue took care of sealing and holding things together. 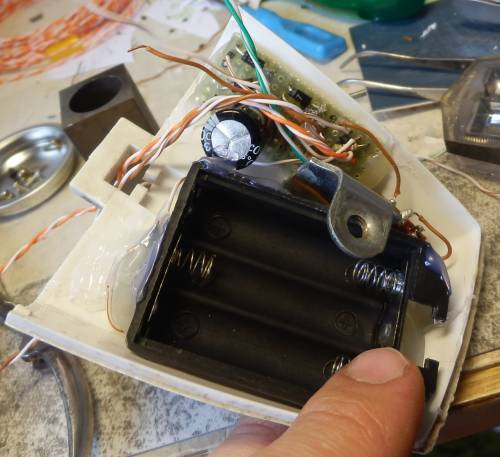 Housing with battery bay glued on. The little PCB is for rectifier and battery circuit resistors. 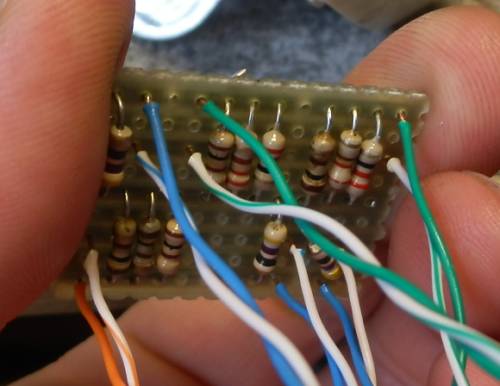 Second PCB - resistor array for the dynamo circuit. I didn't have the right resistors at hand and had to combine them from smaller ones, that's why there are so many of them. 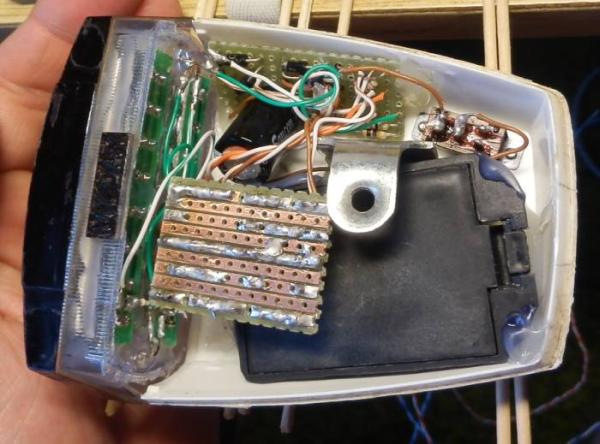 Last view before closing the lid. The resistor array PCB only hangs on the wires, but there's lot of them and the board is light, so it's OK. The little box at the rear right is the battery circuit switch (this particular type is not recommendable - it gets rusty over time), the green PCBs at the front are LED bars. Two battery-powered LEDs are in the corners. 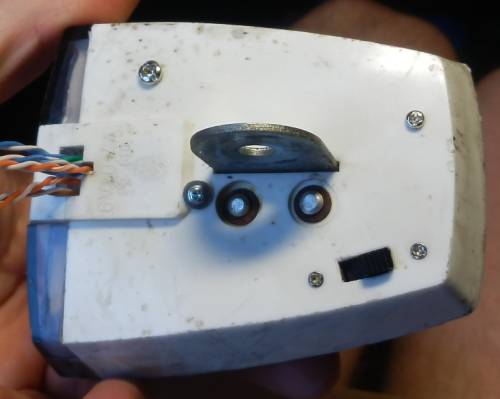 The complete headlight from below. Those three erratic screws stick into the hot glue blob around the battery bay, holding it in place.

Blue lights (click for full size in a new window).

I had used this system for about a year and it was reliable, with the exceptions of oxidizing contact and vibrating axle of the generator and dead batteries from time to time. Hot glue has never failed, regardless of ambient temperature.