My second LED experiment. This time I paid attention to the looks as well because my usual utilitarian contraptions would look terrible on a carefully restored vintage bike.

2.4 watt hub generator. Expecting a 100% reliability, I omitted all backup batteries. Capacitors provide a minute of red light after stopping at a crossroad.

The plan was rather simple: the strongest possible headlight (36 white diodes) and some little red at the rear (3 LEDs). Rear light contains an additional standlight LED.

Soldered on pre-drilled universal circuit boards. The technology could be called "3D": resistors, rectifying and Zener diodes and jumpers at the bottom, white LEDs on long leads at the top. Note: before soldering, it's a good idea to check all edges of the PCB for shorts between the copper strips. I didn't get this idea and it cost me half an hour of part replacement exercise. 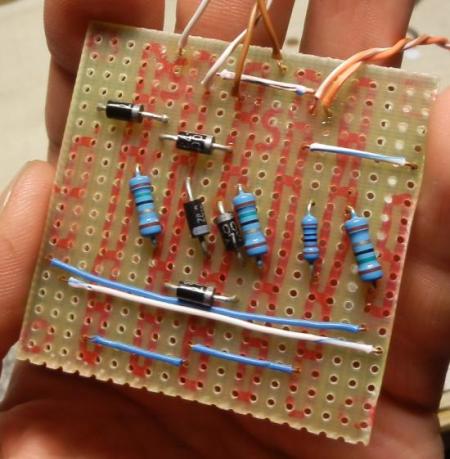 With a low-frequency generator, smoothing capacitors are very important - lights would flicker without them. The bigger capacity the better, so I assembled a total of 8.5 mF from various leftover caps. Flickering was eliminated completely and a usable standlight came as a bonus.

Finished circuit boards. The small one in the middle is the first version of rear light without LED3 and R3. I didn't plan the standlight from the beginning, the capacitors' power was a nice surprise. 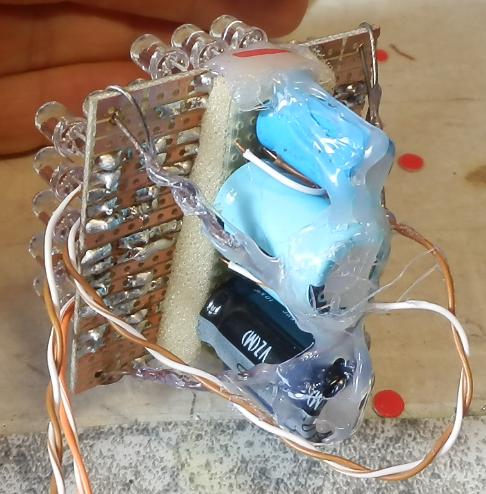 Capacitor array glued to the main board: foam spacer, hot glue and baling wire (conductive strips are cut around those corners). It's good it can't be seen from the outside. 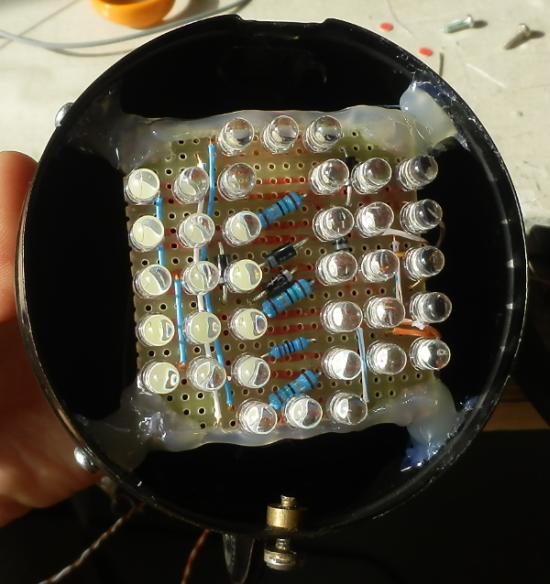 New internals in an old headlight. They're held in place by four screws sticking through the metal housing into the hot glue blob around the PCB.

LEDs emit part of light in unwanted directions, so a reflective plate is called for (in this case some glossy gold cardboard from a candy box): 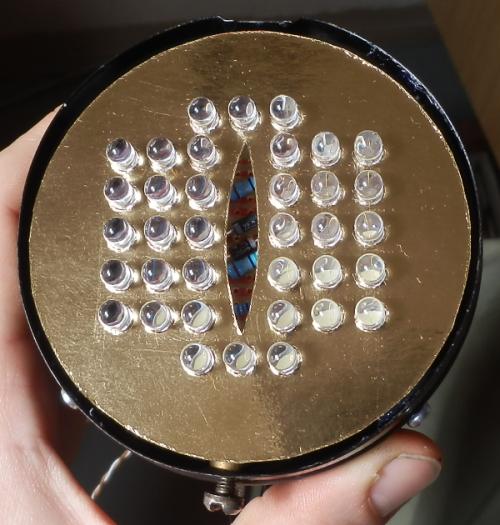 The central slit was not originally planned (it absorbs some little light), but the headlight wouldn't look so cool without it. 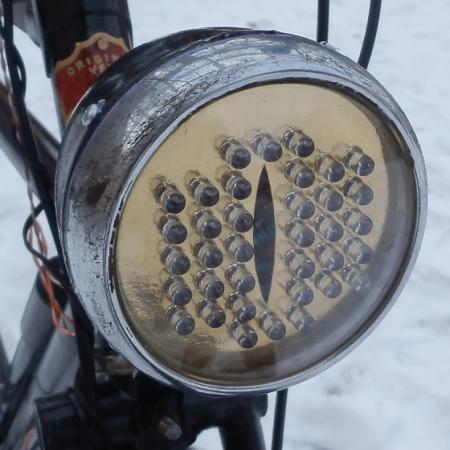 Finished and sealed, the only ventilation hole is at the bottom. The glass is glued into the rim by a transparent polyurethane glue, the old seal fell apart. 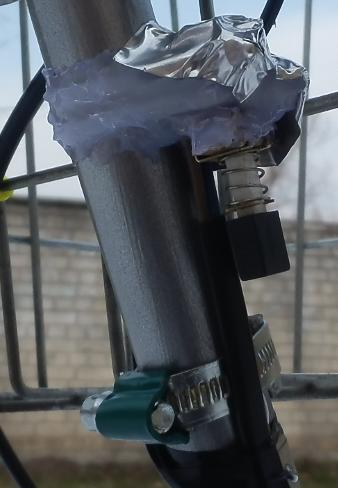 The switch disconnects both wires. Theoretically we only need to disconnect one phase, but who knows what the other one would do in all those capacities, so I played it safe. The button came from my personal scrapyard, rainproofness was achieved by hot glue and aluminium tape. I'm glad it's mostly hidden behind the basket. 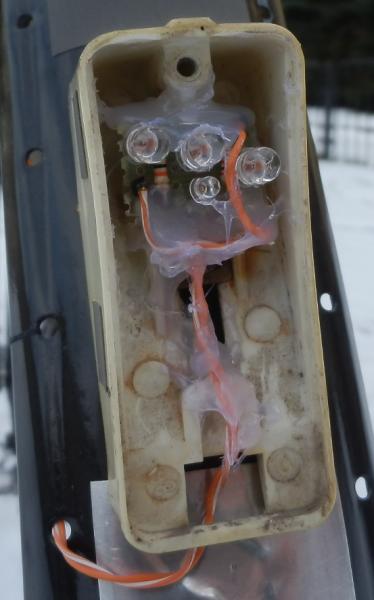 Three big diodes in rear light are LED2, the small one is LED3. Resistor R2 is on the main board inside the headlight, R3 is here - therefore just one pair of wires is needed. The original light bulb socket had to be nipped off to fit the LED board. 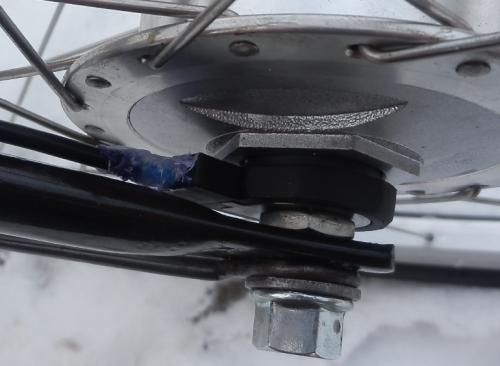 The generator provides two contacts, so you don't have to worry about unreliable ground connections. The bike therefore has no common ground on the frame, all power runs through insulated cables.

How does it work

This is how the voltage rises during acceleration (probably):

("naprázdno" means open circuit, I'm too lazy to translate the picture too)

Until we exceed voltage threshold of the LEDs (6.3 V for the red series, 6.6 for white), there is no current (the cca 1 mA through LED3 is negligible) and the voltage rises along the open circuit curve. The threshold is reached at about 5 km/h (slow walk). With some little more speed we get light, voltage and current rise. At 6 km/h (quick walk) there is enough light to see by. With this resistor configuration, all LEDs consume a maximum of 2.25 W, or 2.77 W with resistor losses included. This power is produced by optimally-loaded generator at about 27 km/h. In reality the load is not optimal because we draw 341 mA of current, so I guess the equivalent resistance is around 25 Ω and we get maximum power at 30 km/h. Here the voltage reaches 8.2 V, which is the threshold value of Zener diode D2. With further acceleration, D2 consumes the extra current and keeps LED current and voltage constant. If the dynamo somehow generates half amper (it doesn't - with this load it is going to end somewhere around 400 mA), the Zener diode would get 160 mA, which is safely below its maximum of 244 mA.

LED3 with a 2110 Ω resistor (R2+R3) draws 2.9 mA at full voltage. It is almost invisible when riding because LED2 overshine it, but it keeps shining for about a minute after the bike stops. All other LEDs quickly suck the capacitors down to their 6.3 V threshold and die. The single-diode standlight is not as powerful as commercially available products, but is enough to warn first other vehicle coming to a halt behind me at a crossroads.

So far the bike has clocked over 6000 km and the lights work as expected.