Three-speed epicyclic gearbox with a backpedal brake. Based on older AW type, but doesn't have the dangerous "neutral" position between gears 2 and 3. Best for short-range utility bikes, but the gear range gives it some touring capability as well. The brake is stronger than classic single-speed Torpedo because it is of larger diametre and is boosted by the gearing. Nice detail is the hub allows turning the wheel backwards - a clutch clicks and the brake doesn't lock.

I use the hub on a rather heavy bike with 28" wheels; for this configuration, 46-tooth chainring and 22-tooth sprocket are just about right. 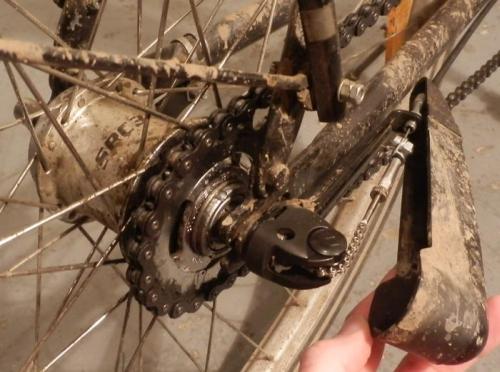 The best way to shift is to stop pedaling or at least slow down the cranks, then flip the lever. Shifting from slower to faster gears should theoretically work under full load: teeth or pawls pop into new positions freely, spinning parts meet them afterwards. But you have to believe everything engages properly on the first try. Shifting from fast to slow can't be done under load, the pawls wouldn't disengage (or at least they wouldn't like it).

How does it work

The gearing consists of one epicyclic stage with four planet cogs. Sun gear is a part of the axle and doesn't turn. In overdrive mode, a clutch engages against the planet pins and spins the cage, the gear ring drives the hub shell by the right-side ratchet and the left-side ratchet is bein overrun. In direct drive mode, the clutch is in mid-position and doesn't engage anything. The gear ring is driven by inner ratchet on the driver and drives the hub shell as before. In gear-down mode, the clutch is pulled further out and disengages the pawls of the right-side ratchet. Gear ring is driven by the driver, the left-side ratchet is driven by the planet cage and drives the shell.

The clutch is moved by an indicator rod running through the hollow axle. A short section of chain pulls it out (to slower gears), a spring returns it back. Adjustment is done by a screw connecting the chain to the control cable and must be repeated after every wheel removal. Some quick release hook would be better.

If the driver turns backward, it engages the gear ring. If the clutch is in overdrive position, it skips a tooth, so the slow gear is always active for braking. The planet cage ends with a worm gear that pushes a conical section into the brake lining which in turn pushes against the hub shell. The torque goes out through the left cone to the reaction arm and to the left chainstay.

The hub has been greased and adjusted in the factory, so the first at least 2000 km should be trouble-free (that's my experience, not an official number). I took mine apart after 2500 km when it started to squeak when pedaling. It was caused by lack of grease between the axle and the planet cage (which, of course, is the worst-accessible spot in the whole mechanism). The manufacturer recommends three different grease types: for bearings, for brake lining and for the rest. To me, it all looked like the same black goo, probably graphite-based (except for several bits of yellow grease). After repacking the hub with one type of standard bicycle grease, it seems to work even better than before. There are no parts that should stay dry (even the brake gets greased), so it might be possible to lubricate the hub with oil that you pour inside through the hollow axle, without a need for disassembly. But I'm not sure it would reach all the critical spots around the axle and whether or not it would leak out through the bearings.

Anyway, after those 2500 km all parts looked like new, just a little polished on the sliding surfaces.

You will need an odd 23 mm spanner for the locknut on the left (or two, but the outer one can be replaced by a universal adjustable wrench), and a 16 mm one for the right-side cone. Rest of the nuts are of standard sizes or you can grab them in a vice (like the big notched flange on the right).

The pawls on the right-side ("fast") ratchet sometimes skip a tooth. Maybe it's a design problem: thin and weak springs hold them in position, and some metal ring slides over them (it looks useless to me, but I was too lazy to try removing it). Now after the repacking the slippage occurs less frequently. Maybe it's because I used slightly thinner grease than the manufacturer, put more of it on the ring and less on the pawls.

Planet cog pins are loose fit in the cage. If you put too much grease on the sliding clutch, they can stick to it and get pulled out of their holes (as observed during experiments with my disassembled hub). So don't overgrease this place and wipe off any excess the cogs have spat here before final assembly. If you are paranoid, you can backpedal slightly when shifting from 3 to 2 to make sure the clutch disengages properly. But it is probably nothing to worry about since Sturmey has been using this system for about a century.